The Netherlands Shook Up The World...Indeed! 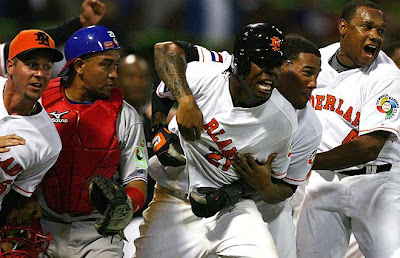 It wasn't as big as the U.S. hockey team's 1980 victory over the Soviet Union in the Olympics. Probably not as prolific as Cassius Clay's(he wasn't Ali then) startling knockout of Sonny Liston for his first heavyweight title either. But it was perhaps as shocking as New England's loss to the New York Giants in the Super Bowl a year ago. Now that I've set the perspective, I'm alluding to the Netherlands stunning, extra inning defeat of the star-studded Dominican Republic baseball team in the World Baseball Classic last night. The Dominican squad was heavily favored and stacked with super talent. The Netherlands guys were either "washed-up" or too inexperienced. Yet they pulled off the gigantic, unimaginable upset. The beauty of sports at its utmost, and a reminder of why we play the game regardless of the spread or the odds. Because anyone can win and anyone can lose on any given day. The Netherlands' team might have just put the WBC on the map by making it a legitimate showcase for baseball competition for all national teams across the entire globe. They indeed shook up the baseball world for the benefit of the WBC, and demonstrated to all of us again that "that's why we play the games"!