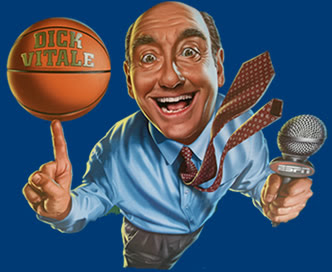 The time has come to set the Final Four. You know, All the nets were hung from the rims with care, in hopes that your favorite team soon would win there. Oops, wrong time of year, my bad. Nevertheless, can your bracket hang in there a little longer? Dick Vitale has his 'Fab Four' as Connecticut, Louisville, Pittsburgh, and North Carolina. He picks the Tarheels to win it all. He'll have all of his crazy descriptives going before the weekend is over. In the words of the incomparable Barney Fife, he's a nut. But he is also a tremendous ambassador for the game of college basketball. In his own words, he's awesome Baby, with a capital 'A'; he's a super scintillating senior adult; he's basketball bonkers. Those are close to what he would say anyway. You catch the drift. For what it's worth, An Opinion On Sports has its Final Four as Louisville, Memphis, North Carolina, and Pitt, with Carolina cutting down the nets! Good luck to all you "bracketeers" as the weekend progresses!