Pete Maravich: Beyond The Brass Ring 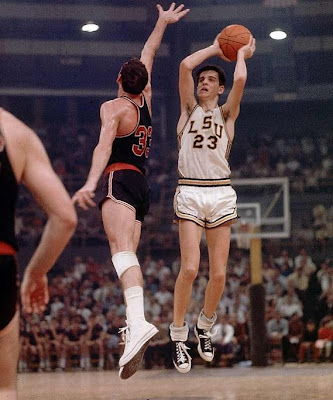 The "Big Ring" story was told more than twenty years ago, so I'm sure most of you have read it before. Regardless of that, it's a great life story to get reacquainted with. Pete Maravich was the greatest "skill" basketball player of our time. I didn't say the most physically gifted or the most athletic athlete, but the most skilled in the offensive game of ball handling, passing, and shooting. Michael Jordan gave the game "hang time", shot innovation, and yes, long shorts. Kareem Abdul-Jabbar gave basketball the "sky hook". Many other players have put their own special touch on the game. Lebron James is in the process of stamping his own identity on the game as well. But it was Maravich who gave us the no-look pass, the behind the back dribble and pass, the floppy gray socks, and above all, he was the first to give us "Show Time". His father told him to learn the game (from his father, Press, by the way), be good enough to play at both the college and professional levels, and maybe even win it all and get a "big ring". So basketball became his life, literally, at the age of seven, and the rest is, as they say, history. He accomplished all his father said he could, and more, but it just wasn't enough. It all lead to unhappiness and misery. But those two led to Jesus Christ. At that point, Pete Maravich finally got beyond the "Big Brass Ring".
Posted by Sports Dawg at 11:45 AM