Jay Cutler: The Bitter Comes With The Sweet 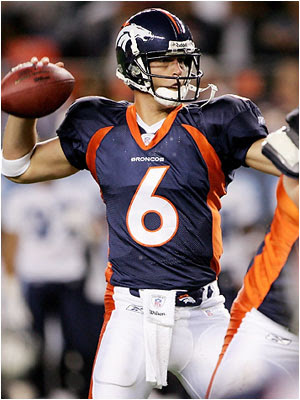 I like Jay Cutler. I really do. I think he did a super job at Vanderbilt, and he's an above average NFL quarterback. He will not have any problems with continuing to earn a living by throwing the rock as a professional. He knows how to play the game at that level. But he is going to have to get more adjusted to the business side of the league. It can be unfair. It can be cut-throat. It was a game in college, but it's a business in the National Football League. You better get used to it. The Broncos tried to trade you. So what? Bigger fish have been traded in the league before.
It really shouldn't matter which team initiated the trade talks. Don't take it personally. Roll with the punches. You might not get the long-term Bronco commitment you're seeking. Just hope the league wants you long term, regardless of whose uniform you wear. Go ahead and show up for the team's off-season conditioning program. Don't make this situation worse on yourself than it needs to be. You have a team, and you have a job. Not everyone is that fortunate right now.
Posted by Sports Dawg at 5:18 PM