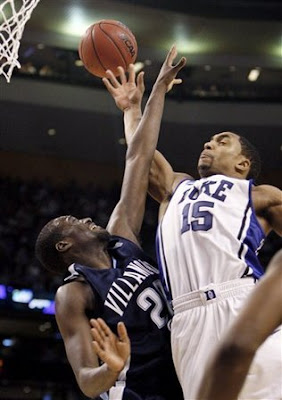 Duke was pasted by Villanova last night 77-54. They were annihilated, dominated, and thrashed. They were exposed as the average team that they truly are. They have been mentioned highly all year long only because of four letters: D-U-K-E. The error in this is that they are no longer the Duke of old, and they haven't been for several years now. They have lived and died with small guards shooting threes for the past few seasons. The guns came up empty for them last night. They were a pathetic 5 for 27 from beyond the arc. Their "Krzyzewski Luck" finally ran out. He even realized his normal berating and baiting of the officials was not going to be of any help on that evening. He just had to suffer through the Blue Devil's worst tournament loss since 1990, when they lost to UNLV and the "Runnin' Rebs" by thirty. They have not made it to the Elite 8 since 2004. There were a lot of 'worsts' for Duke last night, and the 'worsts' might get worse before its over.