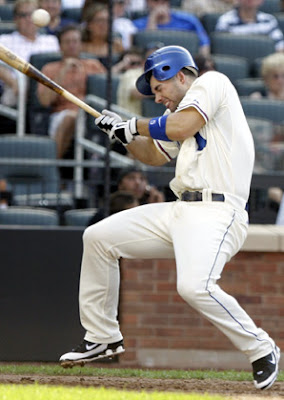 David Wright has been in the 'Big Leagues' for six years and has never been on the disabled list. Until now. Wright rejoined the Mets on Monday after being hit in the head by the Giants Matt Cain this past weekend. The 94 MPH fastball decked Wright, sending him to a Saturday night stay in the hospital for observation. The Mets have now made him inactive for 15 days, as they perform their own observation. The four time all-star third baseman says he feels much better, even the headaches aren't as severe, and did not want to go on the DL. However, with the Mets out of the play-off picture, this is a very smart move on the part of the Mets organization. Why take any unnecessary risks with your marquee player at a time in the season when you're basically just playing spoiler for other teams? Furthermore, the Mets haven't ruled out completely the possibility of keeping Wright on the bench the rest of the season. I don't see him buying into that, but it's fine with me if he sits out all the Braves series against his club.
Posted by Sports Dawg at 11:57 AM