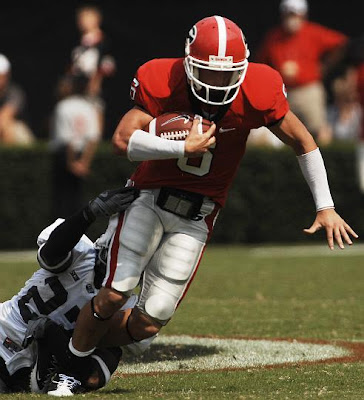 Joe Cox is Georgia's starting quarterback for the 2009 season. And rightfully so. He has paid his dues by waiting his time, and he has certainly earned the right to start. The Dawgs are in good and capable hands with Cox behind center. With that being said, you will see Logan Gray receive far more playing time at quarterback behind Cox this year than Cox got behind Matthew Stafford last year. Gray runs a legitimate 4.4 or 4.5 forty. He will bring a totally new dimension
to the Bulldawg offense. But don't get hung up on the notion that Gray is a one dimensional QB. The kid is capable of hurting teams with his arm as well. He is actually sitting in a very big slot for Mark Richt's offense. Behind him are two true freshmen quarterbacks fresh off of their respective high school campuses. At least one of them will red-shirt this year, possibly both. This in itself makes Logan Gray a valuable commodity. Not to mention the fact he will need experience for 2010 as well. The kid from Missouri can play. And he will. This year for his Georgia Bulldogs.
Posted by Sports Dawg at 3:25 PM