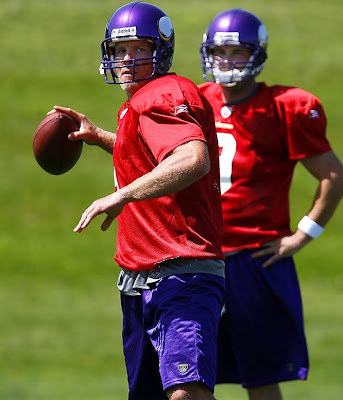 Brett Favre is back and that's o.k. with me. I know he's getting smashed on the talk shows, newspapers, and blogs, but I'd rather hear about 'ole number 4 "un-retiring" again than I had about dog fighting, involuntary manslaughter, drug abuse, and banned substances in the NFL. So the guy has trouble making up his mind, big deal. Is it his fault that there are still suitors out there seeking his services? I dare say the Vikes pursued Brett more than vice-versa. The guy can still play. Minnesota isn't that stupid. Perhaps not play at the level he did even five years ago, but he can play. Maybe his signing says a lot about the current depth at quarterback in the league now. It is somewhat thin, from top to bottom actually. I don't think there are as many super star QB's as there were say a decade ago. You even had a rookie, Matt Ryan, emerge as a star in his freshman campaign. Perhaps the NFL still needs Favre. The Vikings feel that they do.