Greg Paulus to Start at QB for The Orange 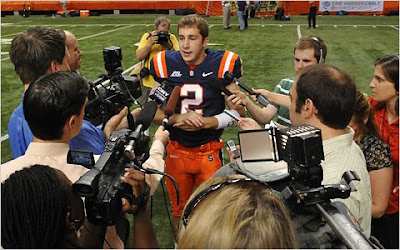 Syracuse University head coach Doug Marrone has tabbed former Duke hoopster Greg Paulus as his starting quarterback for the 2009 season. Paulus last took a competitive snap from center in 2005, in high school. He's been hanging out in Cameron Indoor Stadium for the past four years playing round ball for some coach whose name I can't spell and don't care to learn. It will be interesting to see how this plays out as the season begins and progresses. If I can't learn to like him as a football player anymore than I did as a basketball player, it really won't make much difference to me. Here's hoping some defensive ends get some really good shots on him.
Posted by Sports Dawg at 9:07 AM