Ole Miss: Not Under the Radar Anymore 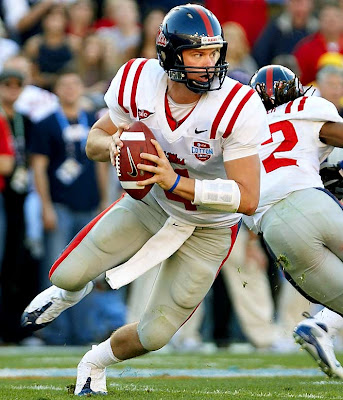 Last season, the Ole Miss Rebels were the underdog upset pick. No one expected too much out of them. After all, the year before, they didn't even have one single SEC victory. But enter transfer quarterback sensation, Jevan Snead, as well as two physical lines, and the Rebs finished 9-4 with a Cotton Bowl victory over Texas Tech. This year everyone has their eyes on Ole Miss. They won't slip up on anyone. But they really don't have a tough schedule. Not by SEC standards anyway. They of course have to play ranked teams Alabama and LSU being in the west division, but they pick up Tennessee, Vanderbilt, and South Carolina from the east. That's a pretty easy draw, considering they bypass the Gators and Dogs. The remainder of their west schedule is relatively light. But there is one thing that really stands out about the rebels to me. That is, they lost three offensive line starters from a year ago. That could be the one detriment that causes big problems for Houston Nutt and his staff. That and the fact that all their opponents will definitely see them coming this year. That Top 10 ranking might prove to be a little high for these boys from Mississippi.