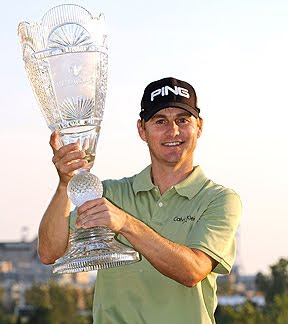 Today's PGA headlines should be about Heath Slocum making a 20 foot putt on the 72nd hole to win the first tournament of the FedEx play-off series at The Barclays yesterday. Instead, it's more about Tiger Woods missing a seven footer to lose. The 35 year old Slocum did not 'back into' this victory. He played well all week, then made a crucial putt when he had to. He deserved the victory, and he deserves top billing this morning. He shouldn't have to play 'second fiddle" to Woods after this big victory. Just another example of the Press forcing Tiger Woods down everyone's throat. Great victory Heath Slocum. You've got "Top Billing" here on An Opinion On Sports!
Posted by Sports Dawg at 9:31 AM