Matthew Stafford: Don't Take the Training Wheels Off Just Yet 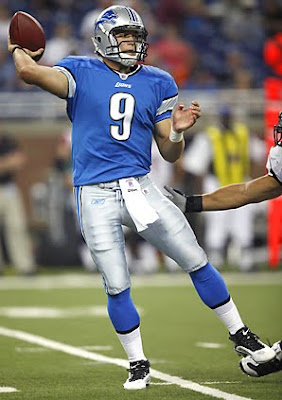 Matthew Stafford completed 7 of 14 passes for 114 yards and 1 touchdown in his Detroit Lions debut Saturday night. He also threw a third down pick that was run back for a touchdown. All in all, the reviews were positive for Stafford. The Lions like the fact that he isn't afraid to make all the throws and then get right back after it following a mistake. His cannon arm will probably be more suited to the pro game than it was to college, but he'll still have to learn the can-dos versus the can't-dos. Like Dirty Harry said, "A man's got to know his limitations". He'll eventually become a good pro quarterback, but I don't think he'll have a Matt Ryan type rookie year. He doesn't have Ryan's discipline yet, nor does he have the surrounding cast Ryan had in Atlanta last year. He might not begin the season as the starter, but he'll play a lot before the season ends. And he'll lead the Lions to a recored better than their 0-16 of a year ago.