Keith Brooking: Playing a Little "D" in the "Big D" 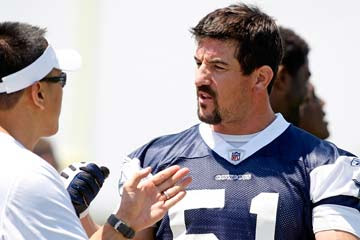 From the time Keith Brooking was six years old until this season, he has played football within the same 20 mile radius of Atlanta, Georgia. He was the only remaining Falcon from the Super Bowl eleven years ago. He started every game for the Dirty Birds, plus led the team in tackles for the past eight seasons. He is an original Atlanta boy. Yet he knew it was time to move on. Thus was the mindset when he signed a 3 year, $6 million deal to play in Jerry Jones' new stadium as a Cowboy. The five time Pro-Bowl linebacker is thrilled to be reunited with his old coach, Wade Phillips. He feels rejuvenated and energized. He's ready to go. He wants to finish his career on a high note, to go out strong on his own terms. Isn't that what all jocks aspire to? He just might do that too. Brooking says his legs feel great, and that he can compete at a "very high level". He feels he's a good fit for the Cowboys' 4-3 defense, and he likes being moved inside in that scheme. I don't usually get all caught up in the careers of former Georgia Tech guys, but here's hoping Keith Brooking finishes his pro career the way he started it. At the top.