Thomas Brown: This Falcon is Keeping the Faith 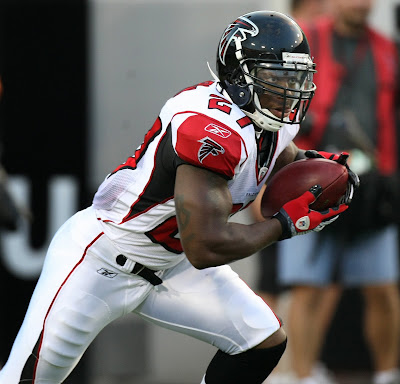 Thomas Brown is a man with a strong Christian faith. He believes that everything happens for a purpose. The former University of Georgia star is using that faith to try and understand God's purpose and will for his life. But that sometimes is easier said than done. In Brown's case, he ponders why after so much hard off season work a year ago, his 2008 season was ended by a groin injury in the final pre-season game. But he has worked hard to recuperate from that injury so that he could be ready for the 2009 season. Now he faces yet another crisis; a leg injury that has cost him part of training camp. Last year the Falcons kept four running backs on their regular season roster. They now have six at that position in training camp. Is Brown caught up in a 'numbers game'? He very well could be. But the Falcons staff and front office are well aware of not only his talent, but just how hard he has worked to get back on the field this year. At least his leg injury is almost healed and he can finish the pre-season strong. Whatever the outcome turns out to be for Thomas Brown this year, it won't shatter his faith. He'll know it's just part of the plan.