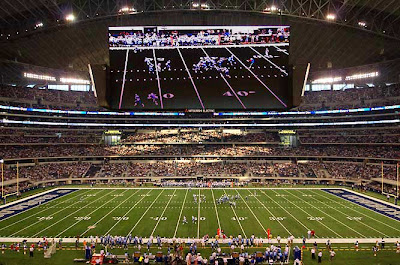 I suppose Jerry Jones just wants to do away with punting the ball in the NFL since the "World's Largest HD Television Screen " is hanging too close to the playing surface at his new Dallas Cowboys Stadium. How do you spend $1.15 billion on a facility and not check out a key point such as the height of a monitor directly above the field? Tennessee Titan's punter A.J. Trapasso booted a ball that struck the bottom of the JumBoTron during the first game at the facility. Jones has said he won't have the screen raised, but we haven't heard from the commissioner's office on the matter yet. I bet those former Cowboys' season ticket holders who were priced out of the new stadium are loving it. I can't say that I blame them.
Posted by Sports Dawg at 6:26 PM