Derek Lowe: The Time is Now to Step-Up 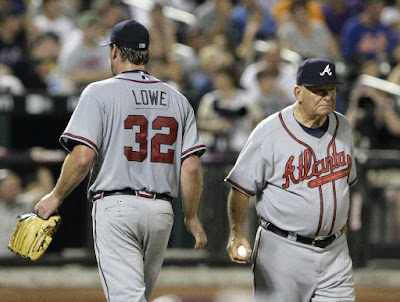 The Atlanta Braves have looked at Derek Lowe as their number one starter all season. That's the reason they signed him to a $60 million contract. He hasn't performed as a number one, nor has he justified that fat $60 mil. Just last night the Braves spotted him to a 4-0 lead against the injury plagued New York Mets. Lowe then proceeded to give up 8 earned runs on 11 hits over 3 2/3 innings. Not exactly what you expect from your number one man down the stretch in a playoff run. Especially in a game Atlanta should not have lost. Granted, Bobby Cox did leave Lowe in too long, but the pitcher just isn't getting it done. It's time for Derek Lowe to step up his game and be the pitcher the Braves signed him to be. We would like to make a little better run at that wild card spot.
Posted by Sports Dawg at 11:34 AM