Atlanta Braves: Whose On Third? 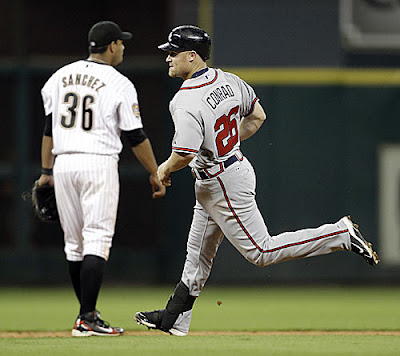 In the wake of Chipper Jones' season ending knee injury, the question that comes to the forefront is who will be the Braves everyday third baseman throughout this crucial stretch run? When Martin Prado returns next week from the DL, I would put him back at his second base position and move Omar Infante to Chipper's spot at third. Now we've got both .300 hitting infielders on the field together. Even though I'm a huge Brooks Conrad fan, I wouldn't make him an everyday player just yet. I say keep him in his super productive role of coming off the bench in crucial situations. Bobby Cox has leaned on him heavily for that throughout the season, and I wouldn't shake up that asset too much. To take the infield situation one step further, if Troy Glaus continues his struggles at the plate in August, I would call up Freddie Freeman from Triple A Gwinnett once we cross that September 1 threshold. If Chipper's around the clubhouse and dugout after surgery continuing to provide his leadership, Atlanta just might pull this playoff thing off, and be a heck of a good team while doing it.
Posted by Sports Dawg at 12:53 PM