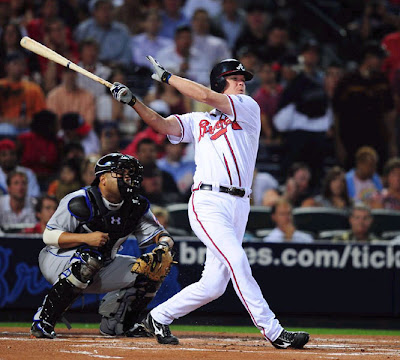 He was just beginning to get it all together this year. Just in time for Atlanta's stretch run for a division title. One could just imagine the old crusty veteran putting this Braves team on his back for one last charge into the playoffs. Then he wrecks his knee again and this storybook season has come to a brutally unfair sudden ending. Will it bring his brilliant career as an Atlanta Brave to a close as well? He has already hinted that this could be his last season. Can he dedicate himself to a long, torrid rehab job at his age and this point in his career? Will he want to play another year coming off major surgery under a new field manager? I hope that he will come back. Chipper can still play this game, and he has matured into a veteran leader. He is the heart and soul of this Atlanta Braves team. He is a vital part of their great team chemistry. He's one of those special athletes who makes the people around him better. I realize this team wants to achieve the division title for outgoing manager Bobby Cox. I now hope they will continue this mission for their captain as well. Give him a big reason to return next year: to defend the Eastern Division title. Or even more. Hang tough "Chip". We're pulling for you, "10".