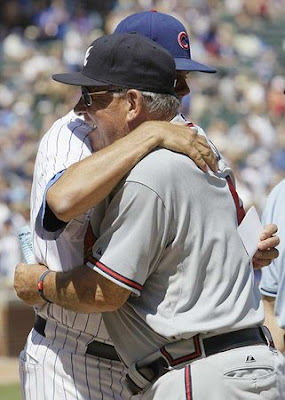 Bobby Cox and Lou Piniella have known each other since 1977 when they were both with the Yankees. Sunday, they gave each other a good-bye hug as they both prepared to manage their last game in Wrigley Field. Sunday was "Sweet Lou's" last game with the Cubs, and Cox won't return to Chicago in this, his last, season with the Braves. There's a lot of water under the bridge with these two career baseball men, and they leave behind two of the more sought after managerial jobs in baseball. Atlanta, of course because they are a perennial contender, and Chicago because of the challenge to finally make it a winner after all the years of futility. It will be interesting to see who gets named to fill these two vacancies before next spring. They will have some big shoes to fill, especially in Atlanta.