Washuan Ealey: Stupid Is As Stupid Does... 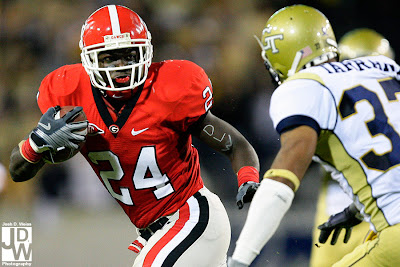 Being out at 3:00 A.M just after summer camp ends, less than ten days before the opening game of the season, and after classes have started is stupid. Leaving the scene of an accident/incident after being advised not to leave is stupid. Failure to appear in court earlier in the summer is stupid. Driving with a suspended license is stupid. Believing you could get away with all of the above is stupid. Washuan Ealey, Georgia's leading rusher from 2009, is guilty of all the above stupid transactions. Now he's been suspended for a minimum of one game by head coach Mark Richt. How deep doth stupidity runneth? Don't go blaming Mark Richt and the other Georgia coaches. They can't shadow 80+ kids 24/7. They knew Ealey's license was suspended and had instructed him not to drive. Now who's fault is that? I ask again, how deep doth stupidity runneth? Until the NCAA gives colleges and universities back athletic dorms, coaching staffs don't have a chance keeping tabs on kids once they leave the practice facilities. Even then, that probably would not be a solution because these things are not a college problem, they're a society problem. They're just magnified by the media when it's a jock at a high profile program. This by no means justifies stupid behavior, but it should illustrate that it's not the fault of Richt, or any other head coach for that matter. They can't be responsible for the behavior of these student/athletes every hour, nor should they be expected to. They lecture, they explain, they probably even plead with these kids. But sometimes you just can't teach stupid. It evidently doth runneth pretty deep.
Posted by Sports Dawg at 8:59 PM