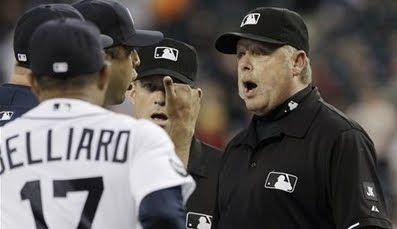 ESPN did a random two week study on the calls made by Major League Baseball umpires. The study revealed that the umpires missed 20% of their calls. That percentage is much higher than I would have thought. I had given umpires far too much credit for being much more accurate than they actually are. As you might imagine, the study was conducted to substantiate the argument of instant replay in baseball. There are so many bang-bang plays in baseball in so many crucial situations, this study might just reinforce the push for additional technology in the game. I like baseball, but I admit it is a slow game already. If replay can be added as a part of the game without slowing it down further, I'm on board with giving it a try. If not, let's just continue to put up with the ineptitude of the umps like we always have.
Posted by Sports Dawg at 5:59 PM