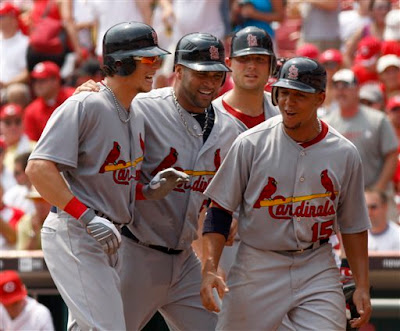 The Cincinnati Reds hate the St. Louis Cardinals. Their second baseman, Brandon Phillips, said as much. Then he picked a fight with the Cardinals. Then he and the Reds lost the final two games of a three game St. Louis sweep. Then he and his Reds discovered that they had also lost their two game division lead, and now trail the Red Birds by a full game. Cincinnati talked big and played small. St. Louis laughed all the way to the division lead. They know how to handle winning. They are accustomed to it, and they do it professionally well. It has been so long since the Reds have won that they are learning how to win all over again, and they are obviously stumbling all over themselves in the process. They just don't get it, not yet anyway. What they better get is the Wild Card, because the Cardinals just took the National League Central. For good.
Posted by Sports Dawg at 7:51 PM