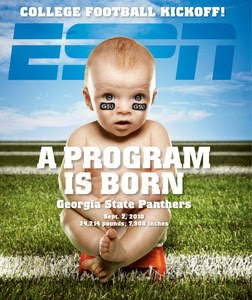 Georgia State University will throw its hat into the college football arena in less than three weeks against Shorter College. I think the football program will be good for the university, as well as for Georgia high school football players, who now have an alternative source of opportunity to play at the college level. The inaugural season has the Panthers facing such opponents as Jacksonville State, Morehead State, and Savannah State. The kicker to this is that to close out the season, Bill Curry's squad will travel to Tuscaloosa to play Alabama. That game i just don't understand if I'm Georgia State. I know all about the big payouts smaller schools receive from playing the big boys, but for a first year program to play a perennial power like Alabama from the SEC just doesn't make sense. I have to think there were other alternatives. I realize smaller programs must have additional revenue to operate their programs, but for goodness sake, not to risk a massacre. I hope for GSU's sake the game isn't televised.