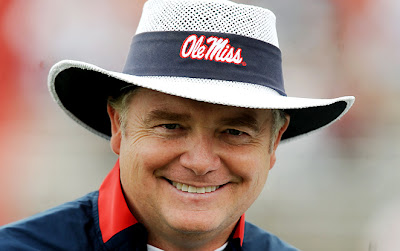 Would you buy a used car from this man? Remember, never trust a Nutt, especially a Houston Nutt. He has just made another controversial decision in bringing to Ole Miss maligned Oregon Duck Jeremiah Masoli. Masoli was kicked off the Oregon squad in June, and Ole Miss had their second string quarterback transfer earlier. So, I suppose both parties were desperate; one for a quarterback, the other to play quarterback. To top it all off, Masoli can play immediately because he is a graduate student in a major that Oregon did not offer. Convenient, huh? Just another one of the quirky NCAA regulations springing forth. My take on this is that the quarterback just might not be as bad a guy as he's portrayed (even though he has trouble telling the truth), and the coach just might not be as good of an ole boy as he's portrayed to be. Houston knows he'll never win the SEC West, just as Steve Spurrier will never win the East, but he'll go to any length to attempt the unobtainable feat. He'll bring in the choir boy, the cell boy, or anyone in between to try and enhance his program. He'll always win a few games he isn't supposed to, and he'll always tank some he should win. The majority of the times his teams are just like their coach: overrated.
Posted by Sports Dawg at 3:24 PM