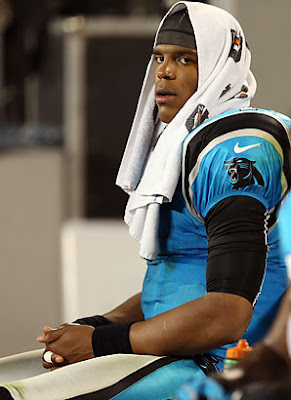 On Thursday night the New York Giants defeated the Carolina Panthers in blowout fashion 36-7. Panthers' starting quarterback Cam Newton was benched late in the fourth quarter due to his less than stellar performance. Newton then covered his head with a towel and sulked on the bench. Veteran wide receiver Steve Smith called Newton out about his actions, saying he should mentally stay in the game and try to learn from back-up QB Derek Anderson. He felt the quarterback needed to learn from his mistakes to become a better player. Smith said the 23 year old Newton should become a man and learn how to handle adversity. The only adversities Newton has had to handle were laptop theft allegations at Florida, and trying to keep secret the fact that he and his Dad were paid for him to play for Auburn. After those situations, handling a few losses in the NFL should be no problem for the spoiled quarterback.