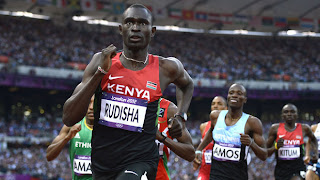 The most incredible feat of the 2012 Olympic Games was Kenyan David Rudisha's winning the men's 800 meter run in 1:40.9. This event did not garner nearly the attention and recognition it should have. Forget the fact that the winning time was a new world record. How could it not be? But don't forget the fact that the winning time was just slightly more than amazing. For more than 50 years it has been maintained that no athlete could ever run below 1:40 in the 800. Rudisha is standing at that threshold. The Wall Street Journal called it the greatest 800 meters ever run. I've always maintained that the 800 is the toughest race in track and field. It was once considered a 'run', as it is still called, but it has actually evolved into a sprint. Rudisha's splits were 49.28 and 51.63. That first lap really stands out when you consider that Grenada's Kirani James won the Olympic 400 Meters in 43.94. The bar has been set now for the 800 by Rudisha. As the 2012 track and field season draws to a close, it will be interesting to see what 2013 and beyond hold for this event. Is running below 1:40 in the cards for any athlete? After these 2012 Olympics, it sure seems to be a realistic possibility.