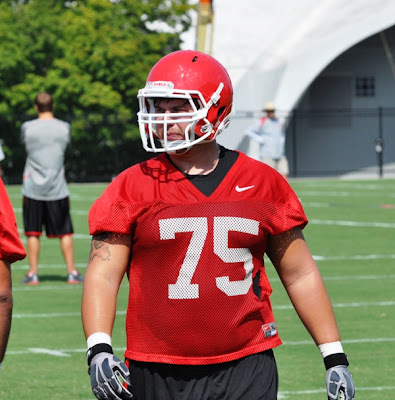 Kolton Houston is the victim of a long running saga that involves his testing positive for a banned substance back in April 2010. The substance, norandrolone, was prescribed to him by a less than honorable physician while he was still in high school in Buford, Georgia. Houston was trying to heal from a high school shoulder injury. Now, two and a half years later, traces of the substance can still be found in his system, even though Georgia can scientifically prove Houston has not used the substance since high school. The NCAA steadfastly maintains that until his tests reach an acceptable level, he will continue to be ineligible to play college football. I understand the 'letter of the law'. I further understand that college athletics must continue their fight against illegal substances and performance enhancing drugs. The integrity of sports must not be compromised. However, when there is a young athlete who is caught up in an inexplicable situation (why won't his system flush out the drug?) where it can be absolutely proven he has not reused norandrolene in more than two years, the 'spirit of the law' has to come into consideration. The NCAA does not need to give Kolton Houston a break, they just need to admit it has been proven by scientific testing that he has not reused the substance (his level has never increased), and therefore should be allowed to compete in his sport. He has paid far too heavy a price for the incompetence of a second rate physician, and not for any conscious wrongdoing of his own volition. The Georgia sophomore needs to be reinstated with four full years of eligibility. Period.