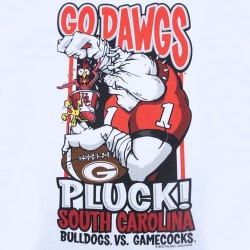 The week has finally arrived. The game that everyone has circled on their schedules. The two best teams in the SEC East, the second and third best teams in the Southeastern Conference. Head-to-head under the lights. Big time, smash-mouth southern football. The Georgia Bulldogs -vs- the South Carolina Gamecocks. The time is here and the time is now. Just a few early perspectives:
That should be enough to get you started and whet your appetite for this week's Georgia -vs- South Carolina game in Columbia.
Posted by Sports Dawg at 12:24 PM