College Football: Helmet Off, Next Play Off 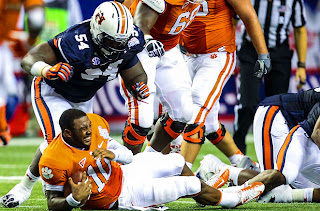 Already the new helmet rule in college football is being second guessed. Even in the Auburn -vs- Clemson game this past weekend, Auburn was accused of intentionally trying to rip the Clemson quarterback's helmet off to force him out of the game for a play. The new rule is being enforced as a preventative safety rule. By that I mean it is intended to encourage players to strap their headgears on tighter so they won't be in danger of having their head exposed, thus not being forced to serve a one-play penalty. It is entirely possible this penalty could affect a key player in a key situation. I don't see it as an actual safety measure because once a helmet is off during the course of a play, the danger to the player exists immediately, even though by rule that player is supposed to stop on the play once his helmet is off. Action on a college football gridiron is happening too fast for that to be practical in many situations. Sitting out the next play isn't going to undo what happened during the previous play. It will be interesting to see how this rule plays out during the course of the 2012 football season. I do hope it keeps players safer somehow.