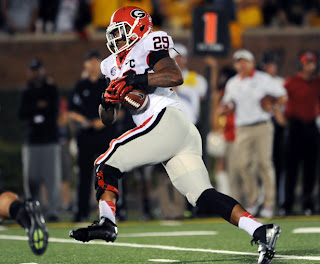 The stage was set. The cameras were rolling. Missouri was going to be the star of the movie. History being made: first SEC game, first SEC win. The storyline was going to read "Old man football won't cut it with Mizzou"!. Then a funny thing happened, one of the support cast got off script. Georgia's Jarvis Jones just took over the game. The player his coach, Mark Richt, said later "may be the best defensive player in America", just put the entire Bulldawg Nation on his back and won the game for Georgia. For the better part of three quarters, it really did look like the shoe might fit Cinderella's foot. Missouri rode the emotion of its fans, its state and a delirious stadium to the point of finding itself in a position to actually pull this thing off. However, the upstart Tigers had no answer for Jones. He completed his night with 8 tackles, 1 sack, 1 forced fumble and 1 interception. But that doesn't tell the entire story.  He was a constant source of defensive pressure on Missouri's offense all night long. He put himself in position to make big plays. He made the guys around him play with more intensity. He made the game easier for his teammates on offense. He led his team to victory. He foiled all of the Tigers hopes, dreams and aspirations. Welcome to the SEC Missouri. Like the board on the UGA sideline read after the game,  It's not old man football, it's "Grown man football"!
Posted by Sports Dawg at 10:18 AM

I have heard about Jones lately at our campus. He serves as an inspiration to someone like me who wants to be at that same field. With all the crowd watching, Jones really gave them a good match to see.