Alabama: Too Early For "Dynasty" Label 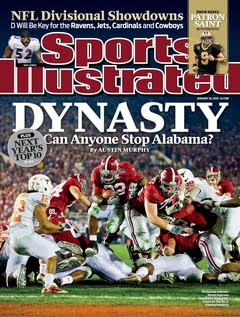 The latest Issue (1/18/2010) of Sports Illustrated proclaims Alabama as a collegiate football dynasty. SI believes all the ingredients are in place for the Tide to continue rolling on and collecting more crystal balls. But isn't this proclamation of superiority just a little early? I do understand the players returning to Tuscaloosa next season, the wealth of talent due to tremendous recruiting years, the prowess of Nick Saban, the ghost of the Bear, etc, etc, etc. It is a storied program, but this national title is just 'one' lately. Let's at least see a repeat before we continue with this dynasty talk. I even venture to say that Alabama should dwell in the Top 5 for five or six years, claiming one or two more titles in that span. Let us see them do that and I'm all in on his talk. Because until then who knows, they might be just a "one and done" memory.