Geno & Jeff: Their Stock is Rising 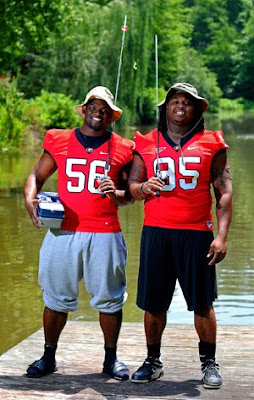 Former Bulldogs Geno Atkins(56) and Jeff Owens(95) both had successful weeks at the Senior Bowl in Mobile, Alabama. The two defensive tackles seem to have vaulted their way into the second round projections of the upcoming NFL draft. The pair surprised NFL scouts with their ability to combine quickness, explosiveness and strength. Neither player had what you would call dominant seasons last year to end their college careers in Athens, so the week in Mobile took on added importance to the two. They certainly did not let themselves down in practices, nor in the game itself. With a continuation of strong workouts in the spring leading up to the NFL combines, the defensive linemen could be sneaking into the first round of the draft. Not a bad "catch" for a pair of Georgia fishermen.