Keith Brooking: Just Get Over It 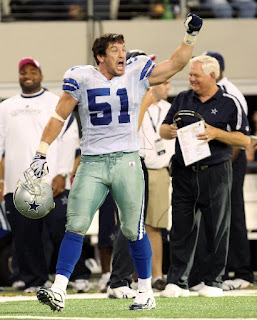 Most of the time, I could care less about professional sports.  I follow the Atlanta Falcons, and I do know what's going on in the NFL.  However, I seldom get too worked up about the Pro game.  I'm pretty much NCAA all the way.  I did watch the playoff game yesterday between Minnesota and Dallas.  One, because the weather wasn't so great in Central Georgia; and two, because I wanted to see the Cowboys lose so that Georgia's new defensive coordinator could get to Athens and begain working.  You see, the defensive line coach for Dallas, Todd Grantham, has been named the 'Dawgs new DC. I don't want him in Dallas working, I want him here working. With all of that prelim out of the way, the reason for this post is Dallas limebacker Keith Brooking.  Minnesota won the game handily 34-3. Brooking had a big problem with the Vikings last score, which came with 1:55 left in the contest game.  He said it was classless and disrespectful.  I think that was what his remarks about the Falcons organization were as well earlier in the year.  Where does he come off with all of this nobility all of a sudden?  Who the heck is Keith Brooking anyway?  It's professional football. Anything goes. In college, you'd have a valid point.  Not the Pros.  You play defense;  you don't like the touchdown, you should have played harder to prevent it.  Oh yea 'Brook', there's no crying in football.  Get over it already.
Posted by Sports Dawg at 12:30 PM