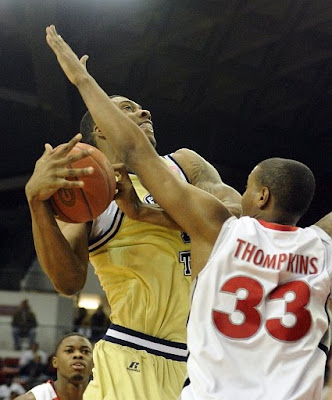 Georgia Tech had not won a basketball game in Georgia's Stegeman Colosseum in 34 years. After Tuesday night's thrashing at the hands of the Bulldogs, they still haven't won in Athens in 34 years. The 20th ranked Yellow Jackets were outplayed by an undermanned Georgia team, and were defeated 73-66. Tech had all the talent on the court, but the Dawgs had all the heart. Mark Fox got every ounce he could have gotten out of his Georgia team, while Paul Hewitt didn't get very many ounces out of his Tech squad at all. Yellow Tech took a butt-kicking back to Atlanta last night, and they will take several more as they get into the thick of their ACC season. The Bulldogs themselves won't highlight many scoreboards this season either. They really aren't very athletic, and they won't be a tournament basketball team. However, if they continue to improve by getting more comfortable in their new system and continue to play hard like they did against the Jackets, they just might surprise a few teams. But for now let's just savor the fact that it is always great to Wreck Tech!