Roger Federer: And the Beat Goes On... 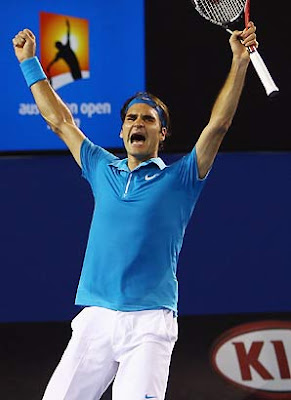 Roger Federer has extended his own record of Grand Slam titles to 16. He defeated Andy Murray 6-3, 6-4, 7-6(11) to claim the Australian Open title at Rod Laver Arena for the fourth time. Federer has now played in 22 Grand Slam finals, including 18 in the last 19 events. Let that soak in a minute if you will. That's making the finals, not just appearing in the tournament itself. It is remarkable for a player to show that kind of exemplary consistency over such a long period in showcase events. Murray was to end the 74 year old drought for British men in Grand Slam tournaments, but against Federer it was not to be. Even after Federer's nemesis, Rafael Nadal, proclaimed that this would be the year for Murray to win the Australian, he couldn't pull it off. However, even Federer admitted about himself that he had played some of the best tennis of his life the past two weeks. And that comes from the game's greatest player who has had plenty of great 'two-week spans' in an already illustrious career. It could be a long year for all the other competitors in Grand Slam events this year. After all, it's "16" and counting.