Will Muschamp: The Ultimate Coordinator 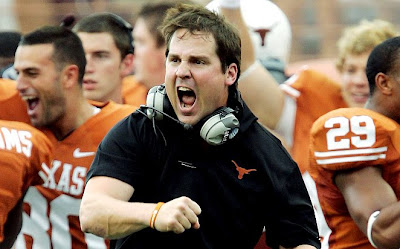 Will Muschamp doesn't throw "Pity Parties". He's never thrown one for himself, and he isn't going to throw one for you. If you throw sorrow at him, he'll show you his 17 inch steel rod and send you on your way. That's the same rod that was placed in his leg by a surgeon in 1989 after a double, compound fracture he suffered in a baseball game. His career as an athlete was looking down the barrel of elimination. Elimination probably would have won if not for the heart and determination of Muschamp. So he knows all about tough breaks and hard luck. However, he knows more about being tough and working hard. He walked on at the University of Georgia and played safety for the Bulldogs from 1991-1994. His first real coaching job was at West Georgia College in 1998, where he made $12,000 and did everything from lining the field to washing uniforms. Now, twelve quick years later, he is the defensive coordinator and "head coach in waiting" at the University of Texas at a salary of $900,000. Not a bad career up to this point for Muschamp, and it will just continue to get better. Texas head man Mack Brown isn't going anywhere anytime soon, but when he does Texas will continue to be in good hands under the leadership of Will Muschamp.