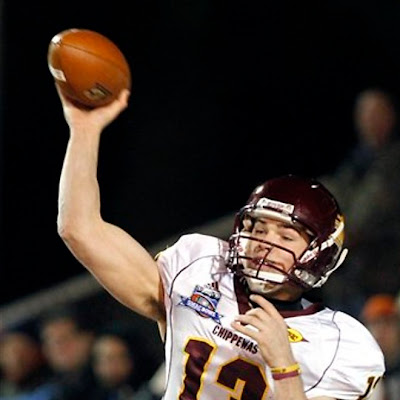 Is it just me, or does it seem like Dan LeFevour has been playing college football forever? He's had to have eight or ten years of college eligibility. We've been hearing about him as quarterback of the Central Michigan Chippewas for ages. Well that long, drawn out, four-year career has finally ended. LeFevour led his team to a dramatic come from behind double overtime victory over Troy University Wednesday night in the GMAC Bowl 44-41. He was 33 of 55 for 395 yards, and ended his career in 2nd place for career total yards with 15,853. LeFevour probably hasn't received the notoriety that he should have, but he will definitely get a shot at football at the next level. Nevertheless, we can't say about him that "we hardly even knew you".