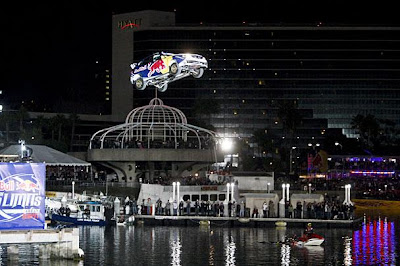 Travis Pastrana set a new rally car long jump just minutes after 2010 was ushered in. His jump of 274 feet shattered the previous mark by more than 100 feet. The feat took place in Long Beach, California over water onto a barge. Even though he was successful in keeping his Subaru dry, he capped off his successful leap by executing a back flip into the cold harbor water. Pastrana's stunt was a continuation of Red Bull's New Years, No Limit Series.