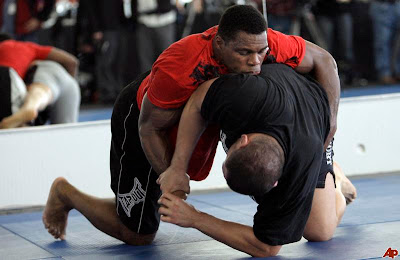 Herschel Walker will be 48 years old in a little more than five weeks. But he has a lot to do before he can celebrate another birthday. On January 30th, Walker will make his MMA debut against Greg Nagi. This is no hoax, no publicity stunt. This is for real. He has trained diligently at one of the sports most renowned gyms, the American Kickboxing Academy in San Jose. As Walker himself has said, he's "in it to win it", and don't let those 47 years of age fool you. His trainers say age is a non-issue because he's more like 47 going on 22 than he is 47 going on 48. He eats only one meal a day (no meats , no fish) and does an untold amount of sit-ups and push-ups, but still lifts no weights. He never sleeps more than four hours per night, and weighs in at a rock-solid 217 pounds. There are no guarantees in MMA fighting, and anything can happen in any given match. However, even with Herschel's lack of training in this sport, I wouldn't count him out because of his tremendous physical condition and enormous willpower. Nagi will be in for a heck of a fight. People get ready, "there's a train a comin'"!