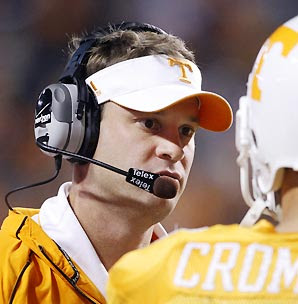 The topsy-turvy off-season of college football continues. Just to preface by recounting a few instances: Brian Kelly leaves Cincinnati for Notre Dame, abandoning the Bearcats for their bowl game; Mike Leach was dismissed at Texas Tech amid a scandal involving the son of an ESPN analyst; Urban Meyer resigned at Florida, then un-resigned for a leave of absence; Florida State's Bobby Bowden was forced into retirement by the University and replaced by "coach in waiting" Jimbo Fisher; Jim Leavitt was fired at South Florida over a player incident/cover-up; Pete Carroll suddenly left Southern Cal for a return to the Pro ranks, and Lane Kiffin dished Tennessee in the shadow of national signing day to replace Carroll at USC. Whew, had enough? Those are just the 'high spots'. However, there have been other head coaching changes as well (Kentucky, Kansas, Louisville, Buffalo, etc). What a December/January in the collegiate coaching ranks! Never a dull moment, huh? Taking the Kiffin/Tennessee saga a bit further, that one really shocked me. Kiffin was about to nail his second Top 5 recruiting class in a row, he was coaching in the premier football conference in America, and it was beginning to appear as if he could back up his brash mouth and attitude with positive results. I did not consider that the lure of returning to Southern Cal would have led to an instant decision on his part to abandon the groundwork he had established in Knoxville. But I guess I failed to consider Kiffin himself, the ultimate "here today, gone tomorrow" coaching nomad. It seems he sure has reaped a lot of monetary rewards at his two head jobs (Oakland & Tennessee) without staying long enough (one year each) to pay that much into the respective programs. I think Al Davis is looking better every minute now. Nevertheless, the 'Brash Boy' of the SEC has run back to the west coast and the southeast is better for it already. Believe me, Vol Nation, you will be better off in the long run. You see, Kiffin doesn't seem to like long runs anyway.
Posted by Sports Dawg at 10:57 AM