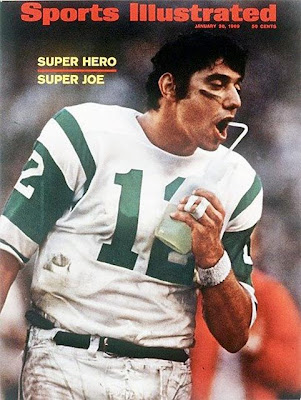 On this date, January 12, 1969, Joe Namath led his New York Jets to a monumental upset of the Baltimore Colts in Super Bowl III. It was the AFL's first victory in the championship game, a victory that Namath famously "guaranteed" to the press during the week preceding the game. Namath was named the game's most outstanding player, going 17 of 28 for 206 yards. The Jets Matt Snell rushed for 121 yards as well. The win over the Colts legitimized the merger between the two professional football leagues, earning tremendously needed credibility for the AFL, for Namath, and for the Jets franchise..
Posted by Sports Dawg at 4:33 PM