Tim Tebow: A Gator Out of His Element 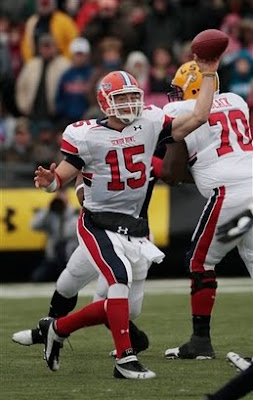 Perhaps for the first time in his life, Tim Tebow looked out of place on a football field. Critics have labeled his performance in the Senior bowl as "shaky", and that descriptive is being kind to the former Florida Gator. He was 8 for 12 for 50 yards passing, his longest completion being a whopping eleven yards. He looked awkward and appeared to be uncomfortable throwing the football while running an offense dependant on a quarterback's arm. He also threw in two fumbles for good measure. Tebow is a winner in every sense of the word, and the NFL team that drafts him will be doing so with that in mind. His talent was a great fit for the college game, but it will have to be refined for the professional arena. The team that needs a young quarterback will have several legitimate candidates to consider before giving Tebow the slightest thought. He will be drafted at some point by an NFL franchise, if for no other reason than his name and college accomplishments. However, he has a long way to go to become a legitimate player at the next level. He'll sign a contract and make some substantial dollars, but they might be in payment for wearing a cap and holding a clipboard.