Kirby Smart: No "Dawg Days" In His Future 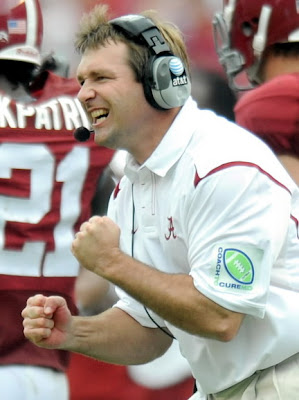 Kirby Smart will remain at The University of Alabama as their defensive coordinator (or as their co-defensive coordinator with Nick Saban, if you prefer). Smart will not be returning to his Alma mater as Georgia's defensive coordinator as was rumored/speculated. Unlike many of my UGA colleagues, I see two "rights" in this scenario. I think Mark Richt and Georgia were right to offer Smart the Dawg DC job. After all, he is considered to be one of the top assistant coaches in the country (along with fellow former Dawg Will Muschamp). He played football at Georgia, and his wife was a Lady Dawg basketball player, so it would have been a good fit for both of them. The chance to come 'home' seemed like it would be an enticing lure for Smart. Georgia's reported offer would have made him the third highest assistant in the land. So emotionally as well as monetarily, the hire would have been good for both parties. But realistically, the career path for Kirby will be faster and smoother with Saban and the Tide. I presume he aspires to be a head coach one day, and the lateral move to Athens wasn't going to hasten that. It might not have hurt it either, but Richt might have had to go through all of this again sooner than he would have liked. Smart will be offered a college head coaching position soon. Meanwhile, Georgia will find the 'right' guy to fill their coaching vacancy, and it will be someone who wants to be at Georgia and help the Dawgs get back to the level of defensive intensity they so desire. These two "rights" will turn into two "wins" when it's all said and done.