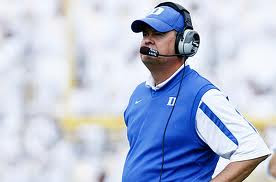 The North Carolina Tarheels had defeated the Duke Blue Devils 21 out of the past 22 games. Yesterday, those same Tarheels fell to those same Blue Devils 33-30. But the win was more than just retaliation on an arch rival. It was a culmination to a long process which began when Duke hired David Cutcliffe to become its head football coach five years ago. You see, the victory over Carolina was Duke's sixth win of the season, and for the first time since 1994, the Blue Devils are bowl eligible. Duke's record is now 6-2 for the season. David Cutcliffe was hired to bring respectability to the program. Cutcliffe has done just that. Duke is respectable. Nice job, Coach Cutcliffe!