Ohio State: Get 'Em Out of the Polls 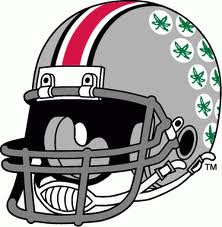 Ohio State is on a three year probation period imposed by the NCAA. Along with that they are banned from post-season play this year. The Buckeyes are currently undefeated and ranked #8 in the AP pole. Now people are beginning to ask what if OSU stays undefeated, climbs the charts and becomes number one? They have a cushy schedule remaining and teams in front of them could possibly suffer a loss. But with a bowl ban they obviously can't compete outright for the mythical National Championship. I wonder why they're even ranked in the polls in the first place. Not being allowed to be ranked should be part of the probation. Think about it; the reason you're on probation has a lot to do with your ability to be ranked in the first place. You cheated to gain an advantage. Then you got caught. You should be denied the right to be recognized by conference standings, polls and rankings. I'm not just saying Ohio State, this should be part of the probation for any school under these circumstances. Don't commit the crime if you can't do the time. Just sayin...
Posted by Sports Dawg at 9:27 PM