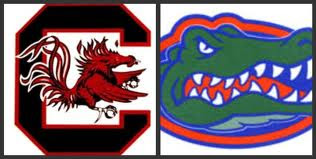 Arguably the second and third best teams in the SEC do battle Saturday in Gainesville, Florida. And actually, the Florida Gators and the South Carolina Gamecocks are two very similar teams. They both are very physical and quick on the defensive side of the ball. Offensively, the two teams each feature quarterbacks who can hurt you with their running, as well as passing abilities. The Gators and the Gamecocks both feature top tier tailbacks who carry the bulk of their respective ground games. The game is bigger than huge. The loser will be behind the eight ball in the quest to be the Eastern  Division representative in the conference championship game. Subsequently, depending on who wins and who loses Saturday, it could make the Georgia - Florida contest in two weekends just as or more important for all three of those teams. Florida has been a team that seems to get better each Saturday, and Carolina is coming off a tough road loss at LSU. If the game were to be played in Columbia, I would give the nod to the Gamecocks.  But it isn't.  I think playing in "The Swamp" will make the difference in this game.