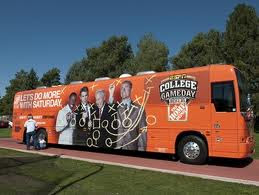 ESPN's "College Gameday" will broadcast from Columbia, S.C Saturday. They'll be in town when the number 5 ranked Georgia Bulldogs take on the number 6 ranked South Carolina Gamecocks. The Gamecocks are an early opening 2 1/2 point favorite in the 7:00 P.M. ESPN game. South Carolina has defeated Georgia the past two seasons, but the Bulldogs are the defending Eastern Division champions. The game will feature two of the SEC's most celebrated defensive players in Carolina's standout defensive end Jadeveon Clowney and Georgia's All-American linebacker Jarvis Jones. Offensively, three of the best tailbacks in the South will be on display: the Gamecocks' outstanding junior Marcus Lattimore, and the Bulldogs' dynamic freshmen duo of Todd Gurley and Keith Marshall. USC coach Steve Spurrier states, "it's a huge game, we all know it", while his adversary, Mark Richt of UGA, adds "it's a big, big game". Anytime undefeated SEC rivals match-up against each other with so much at stake, it could be gigantic. It's that type of game.