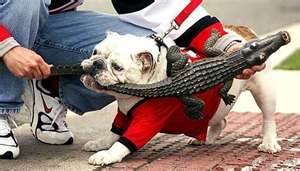 There is an old saying in the south that refers to those who fish and those who cut bait. That's what this year's Georgia-Florida contest is all about. The real players are the ones who fish; the 'wanna-be's' cut bait. All the talk and rhetoric will mean absolutely nothing once game time gets here Saturday afternoon. I'm sure this is one of those games that both teams talked about over the off-season. It's a "mark-it-on-your-calendar" kind of clash. This year all the marbles are on the table. It's winner take all; punch your ticket to Atlanta. What you have been and what you are up to this point does not matter anymore. South Carolina was a big game for both Georgia and Florida, but those two games pale in comparison to the drama building for this year's edition of the "World's Largest Outdoor Cocktail Party". It's a second chance for Georgia to prove that they can show up and play in a big game. They've also been given a second chance to control their own destiny in the SEC Eastern Division. They have another opportunity to win back the confidence of the Bulldog Nation. Both schools want to win the division and Florida wants to remain in the chase for the BCS Championship, but I think more is riding on this game for the Dawgs as opposed to the Gators. Which team can man-up and take care of business? This is for sure: When it is all said and done on Saturday, we will then know who can fish and who can just cut bait.
Posted by Sports Dawg at 11:07 AM