Felix Baumgartner: Who Said The Sky Is The Limit? 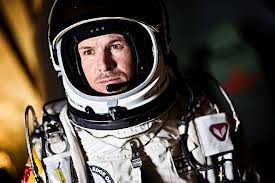 Austrian daredevil Felix Baumgartner jumped from a small ledge of a hot-air balloon 24 miles above the earth. It was the highest skydive ever. In achieving 730+ miles per hour during the descent, he also became the first skydiver to break the sound barrier. His flight earthward took nine minutes, with about 4 1/2 minutes of free falling before opening his parachute. At one point during the flight, his body began spinning wildly out of control. Baumgartner, however, was able to regain control and landed in the New Mexico desert safely.
.
Posted by Sports Dawg at 11:54 AM