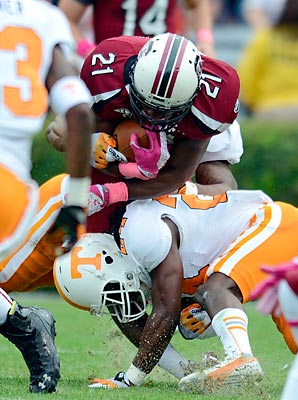 This is an unconfirmed report:
News is leaking out about Marcus Lattimore's tragic knee injury, and it doesn't look good. The South Carolina running back reportedly broke his femur and patella and tore four ligaments in his right knee -- his ACL, MCL, PCL and LCL according to Brian VanOchten of WDGM. Lattimore tore a ligament in his left knee in 2011, and had finally made a full comeback from that injury.
I wonder if it compares to this:
After four hours of surgery on Tuesday, when surgeons discovered he had injuries to all four ligaments in his left knee as well as nerve damage, the Patriots' orthopedist, Bertram Zarins, said he was ''pessimistic'' that Edwards would play again.
I'm sure everyone, and especially Robert Edwards, hopes this is not the case.
UPDATE
Posted by Sports Dawg at 2:21 PM